The History of Mary Whitney Phelps Tent No. 22

Connie Irby researched the possibility of Springfield having a tent of the Daughters of Union Veterans of the Civil War. By October 3, 1999, plans were complete, and 32 members signed the charter at First and Calvary Presbyterian Church.

Tent No. 22 participates in many local and area events honoring the Civil War. At each month's meeting, a Civil War-themed program is presented before the business meeting. Six ancestor memorial programs have been completed on location at gravesites. Due to the increase in membership, a new vignette “Celebrating and Honoring the Life of Our DUV Ancestor” will become a part of each meeting in 2015. In May, Union veterans are honoured with a memorial ceremony held at Mary Whitney Phelps' gravesite in Hazelwood Cemetery, Springfield, MO. The program includes a wreath-laying and tribute to Mary Whitney Phelps

Tent No. 22 is a member of the Wilson’s Creek National Battlefield Foundation. The tent has supported the annual Anniversary of the Battle of Wilson's Creek ceremony and the moonlight tours as a group. Members have volunteered each year in the preparations for the luminary tour in December.

Members of Tent No. 22 have enjoyed several social gatherings with the Phelps Camp of the Sons of Union Veterans of the Civil War. The two organizations help each other with special dedication ceremonies remembering our ancestors. 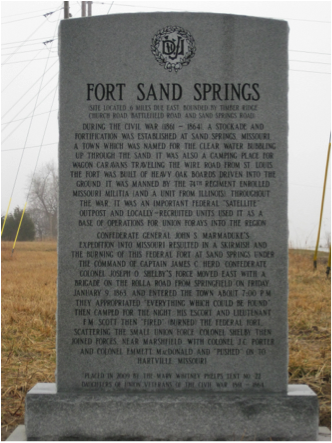 In 2009, Tent No. 22 placed a historical marker in Webster County, MO, near the site of Fort Sand Springs. The marker, located at the corner of Highway 38 and Timber Ridge Road, tells of the significance of Fort Sand Springs during the war and a partial listing of the names of men who were stationed there. Click here for photographs. 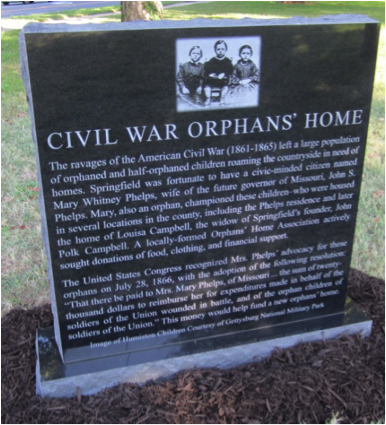 Tent No. 22 placed a historical marker on the grounds of Sunshine Elementary School, Springfield, MO, in 2011. The black granite marker, located on the northeast corner of Sunshine Street and Jefferson Avenue, recognizes the work of Mary Whitney Phelps in establishing a Civil War Orphans’ Home. Students at Sunshine School assisted in the unveiling and dedication of this marker. Click here for more photos.

In 2012, the Tent placed a marker on the northeast corner of Virginia and Brookside in Phelps Grove Park honoring Mary Whitney Phelps. The marker tells of Mrs. Phelps’ dedication to the soldiers after the battles of Wilson’s Creek and Pea Ridge, her care for the body of Union General Nathaniel Lyon’s body after he was killed at the Battle of Wilson’s Creek, her work with orphaned children from the war, and her association with the Confederate Burial Association, as well as the National Woman Suffrage Association. Phelps descendants from across the United States helped the Tent celebrate the dedication of this marker. Click here for more about the Mary Whitney Phelps marker dedication.

To help preserve the Civil War history of southwest Missouri, Tent No. 22 published a book that highlights Civil War markers and monuments in the Ozarks. A book containing our ancestor’s stories has also been published.

Tent No. 22 engages in several continuing special projects. Patriotic instruction for elementary school children has been very popular with teachers and children alike. A 4x6-inch flag is given to each child, and the program includes flag etiquette and the singing of patriotic songs. Porch flags have been given to residents of new homes in the Habitat for Humanity program since 2003. Each year, the Tent participates in the Adopt-a-Veteran project at the Mt. Vernon [MO] Veterans’ Home in fulfilling the veterans’ Christmas wish list. We continue to keep the memories of our ancestors alive as we honor God, Country, and flag. 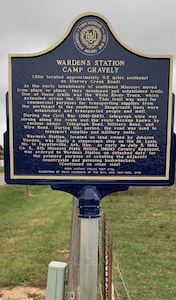 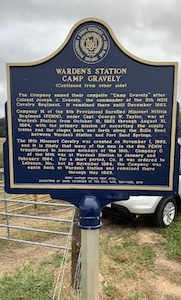 On November 3, 2019, Tent No. 22 placed a historical marker near the site of Warden’s Station. The marker, located at 6161 Long Highway Y, near Conway, Webster County, MO, at the Wayne and Janet Whitehead farm, tells of the significance of Warden’s Station during the Civil War. As early as July 5, 1863, Co. K, 8th Missouri State Militia Cavalry Regiment, was ordered to Warden’s station for the primary purpose of scouting the adjacent countryside and pursuing bushwhackers. In 1864, Co. M of the 6th Provisional Enrolled Missouri Militia Regiment, was at Warden’s Station with the primary mission of escorting the supply trains and the stages back and forth along the Rolla Road between Warden’s Station and Sand Springs Station.

The following is the inscription on the marker:

As the early inhabitants of southwest Missouri moved from place to place, they developed and established trails. One of these trails was the White River Trace, which extended across the Ozarks. This trail was used for commercial purposes for transporting supplies from the northeast to the southwest. Stagecoach lines were established and transported people and mail.

During the Civil War (1861-1865), telegraph wire was strung along the route and the route became known by various names: Telegraph Road, Military Road, and Wire Road. During this period, the road was used to transport supplies and military units.

Warden’s Station, located on land owned by Johnson Warden, was likely a stagecoach stop on the St. Louis, Mo. to Fayetteville, Ark. line. As early as July 5, 1863, Co. K, 8th Missouri State Militia (MSM) Cavalry Regiment, was ordered to Warden’s Station on detached duty for the primary purpose of scouting the adjacent countryside and pursuing bushwhackers.

(Continued on other side)

(Continued from other side)

The Company named their campsite “Camp Gravely” after Colonel Joseph J. Gravely, the commander of the 8th MSM Cavalry Regiment. It remained there until December 1863.

Company M of the 6th Provisional Enrolled Missouri Militia Regiment (PEMM), under Capt. George W. Taylor, was at Warden’s Station from October 31, 1863 through August 31, 1864, with the primary mission of escorting the supply trains and the stages back and forth along the Rolla Road between Warden’s Station and  Fort Sand Springs.

The 16th Missouri Cavalry was created on November 1, 1863, and it is likely that many of the men in the 6th PEMM transitioned to become members of the 16th. Company G of the 16th was at Warden's Station in January and February 1864. For a short period, Co. M was ordered to Lebanon, Mo., but by November 1864, the Company was again back at Warden’s Station and remained there through May 1865.